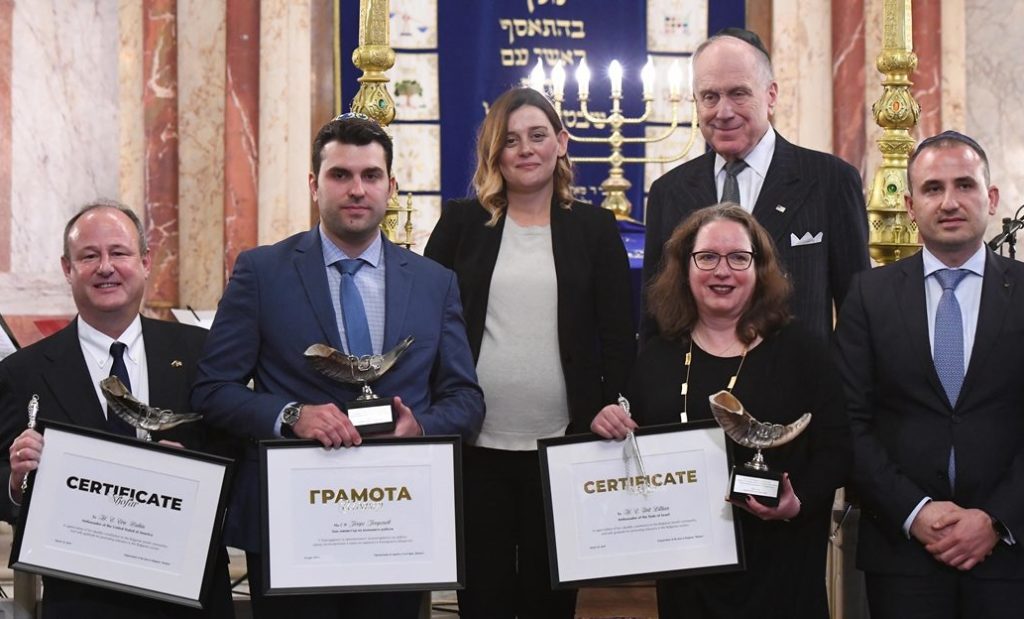 The honour was handed over by head of state President Roumen Radev on the day that Bulgaria commemorated the 76th anniversary of the rescue of the Bulgarian Jews from being murdered in the death camps of the Holocaust.

Radev said that the joint initiatives of the World Jewish Congress and the Organization of the Jews in Bulgaria Shalom contributed not only to increasing intolerance and opposition to xenophobia and discrimination, but also to better co-operation with the Bulgarian institutions for action against antisemitism and hate speech.

“The rescue of the Bulgarian Jews is not only a historical event, but an inspiring example for today and tomorrow,” he said.

Lauder praised the Bulgarian people for standing up to the Nazis during the Second World War, and again now, against the rise of neo-Nazis.

“Once again, the Bulgarian people, along with their leaders have stood together and said: ‘We will not tolerate antisemitism or hatred of any kind.’ President Radev and Prime Minister [Boiko] Borissov have been so responsive to any kind of anti-Jewish hatred, setting an example for all world leaders. The World Jewish Congress thanks you for your outspoken clarity.”

Lauder also thanked the many NGOs from across Bulgarian civil society who have pledged to sign the Memorandum to Fight Hate speech in Bulgaria, adding: “I think it is very clear where the future lies. It lies with tolerance, good neighbours, and everyone working together to build a better world for our children.

In the evening, Lauder was among guests and speakers at a commemoration ceremony at Sofia Central Synagogue.

Speeches were delivered by Sofia Cohen, President of the Central Israelite Religious Council of Bulgaria, Deputy Foreign Minister Georg Georgiev, who is Bulgaria’s National Co-ordinator against Antisemitism, and Maxim Benvenisti of Shalom’s Tzedaka Foundation, who introduced the history of those ordinary Bulgarians who participated in the rescue of the Bulgarian Jews.

Shalom conferred its highest honour, the Shofar award, on Georgiev and on US ambassador Eric Rubin and Israeli ambassador Irit Lilian.

Shalom, furthering its campaign to build a partnership network with NGOs committed to a society without division, intolerance and hate speech, signed a memorandum of co-operation with 10 NGOs at the ceremony. This was a sequel to the signing of the memorandum in February with the GLAS Foundation.

The 10 NGOs with which the memorandum was signed are the Association of European Journalists Bulgaria, the Association of Families for Partnership in Psychiatry, the Bulgarian Fund for Women, the Bulgarian Helsinki Committee, Jamba – an organisation that connects people with diverse abilities to employers, the National Foster Care Association, the Bilitis Foundation, Marginalia, the Movement of Bulgarian Mothers, and Maiko Mila, a support website for mothers.

Article and photos originally posted on The Sofia Globe