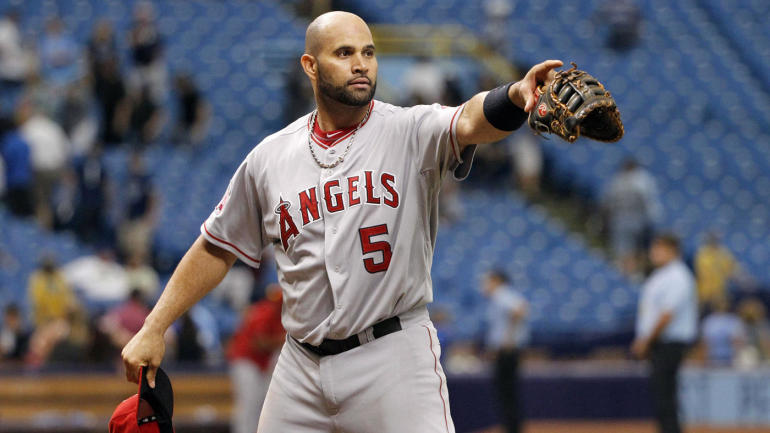 Rema DuPont, a UNWFPA board member, presented the award to the Los Angeles Angels‘ first baseman and his wife, who have devoted themselves to fighting human trafficking not only in the United States but worldwide.

Albert Pujols, who had already begun spring training with the Angels in Arizona, said he came to New York for the award and will return right away, adding “gracias a Dios,” (thank God) he is better from his injuries.

Barbara Winston, the UNWFPA president, said, “It’s because of these high profile people … [human trafficking awareness is] beginning to get traction.”

Albert, Deidre and the representatives of Major League Baseball spoke with CBS News Radio for a segment produced by Jonathan Clark and Christopher Buckley on what the duo are doing to shine a spotlight on modern slavery.

For Deirdre, human trafficking goes beyond the traditional umbrella definition for the “act of recruiting, harboring, transporting, providing or obtaining a person for compelled labor or commercial sex acts through the use of force, fraud or coercion, under the U.S. Trafficking Victims Protection Act.”

To her, it also includes the desperate prostitutes she encountered hustling near Angel Stadium in Anaheim, California. That experience caused her to say “enough.” She told the audience filled with stars of film, design and sports — as well as dozens of diplomats — that she and Albert have been working on this issue for 19 years. They decided to formalize their efforts two years ago with the non-profit.

Former New York City Police Commissioner Ray Kelly, CEO of Guardian Group and one of the event chairs, explained: “It’s more complex than people think; it’s not just a question of force.” He said that there are all sorts of pressures that enslave these victims.

“They have become passionate about raising awareness about human trafficking,” said Leonor Colon, MLB director of player operations. “To hear their passion about the cause was extremely inspiring. This is a topic that has affected our baseball family … and hearing the players speak about how they want to use their voice for those who do not have one was something that touched us.”

This month, MLB and the MLBPA jointly announced that they would contribute $500,000 through 2021 toward anti-trafficking non-profits, including Strike Out Slavery, that are dedicated to fighting human trafficking.

“Baseball has put this at the forefront of some of the work we’ve been doing on a charitable stage,” said Melanie LaGrande, MLB’s vice president of social responsibility.

With almost a dozen global partners, Strike Out Slavery has enlisted MLB teams and stadiums for exhibition games and concerts, including a recent performance by singer-songwriter Nick Jonas.

“It’s a home run for everybody,” Albert Pujols said on CBS News Radio, “and it’s an honor for everybody. If you are talking about 2017, we started with one stadium, and now we have four, maybe five this year. It is an honor and we are blessed to have accomplished what we accomplished. Our goal is to have all 30 ball clubs.”

It started with the Angel Stadium in 2017. Nationals Park jumped on board in 2018. “This year, we’ll be with the New York Mets and the Kansas City Royals … where I am from,” Deidre Puols said.

Last September, the Pujolses sponsored an evening event in Anaheim with a fireworks-lit-sky over Angel Stadium to shine a light, as they said, on the growing problem of sex trafficking around the world..

“Not in Our Ballpark” is the anthem of baseball’s fight

Human trafficking numbers are higher than ever before, Strike Out Slavery says, with 46 million victims worldwide. It is on the rise in the U.S. and “the fastest-growing criminal industry in the world, generating $150 billion annually.”

Survivors of human trafficking visit stadiums to speak with baseball fans and the community at the event.

Fashion icon Naeem Khan, who was at the U.N. event to receive an award for women’s empowerment, spoke about the impact of Strike Out Slavery: “The organization brings it to light. They are so involved getting the information out there. We are now becoming the ambassadors for this issue.”

Ben Stiller was also at the event to receive an advocacy award.

Human trafficking in the stadium lights

Albert and Deidre Pujols have been tireless in their effort to recruit MLB teams.

“My hope is that people will understand that what we’re trying to do is create an atmosphere in a baseball stadium that will allow people to get educated about human trafficking,” Deidre said. “It’s alarming how many people still often say, ‘Whoa, I didn’t know this was happening [in the U.S.].'”

She said that Albert, three-time National League most valuable player, had done work to help his native Dominican Republic, but the issue of human trafficking was new to both of them and they felt they had to make a contribution.

They ran two concerts in Anaheim and one at Nationals Park in Washington, D.C. with plans in 2019 for events at Angel Stadium, Citi Field, Kauffman Stadium and Nationals Park. The hope is to have a concert in all 30 MLB ballparks in the future. Deidre is hoping for five teams this year. The concerts have been funded by the Pujolses personally with the teams partnering in the event.

In almost two decades in baseball, Deidre told CBS News Radio she had never had an encounter like the aforementioned one before. On Strike Out Slavery Day last year at Nationals Park, she was ordering a drink and spotted a group of girls in their early 20s interacting with the crowd about a gentleman’s club. She spent about 25 minutes with them and tried to discuss what they were doing. “This is why we have to get people educated,” Deidre said.

At the U.N., there is a heightened awareness of the importance of educating young people about the risk of trafficking. A U.N. report published in January warns “the number of human trafficking victims is on the rise” as criminal gangs and terror groups prey increasingly on women and children to make money and bolster their numbers. The 90-page “Global Trafficking in Persons” report says that children, who account for 30 percent of all trafficking victims, include “far more” girls than boys. Sexual exploitation is the main motivation for the trafficking, the report says, accounting for about 59 percent.

Last year, Washington Nationals pitcher Stephen Strasburg joined the foundation’s efforts as an ambassador. Asked if Deidre had a wish list of players she wanted to recruit as ambassadors, she said she hoped for more “in a heartbeat.”

Deidre hopes to join Albert at spring training in Arizona this year, and she may go to Florida after that. This is where the MLBPA comes into play to help her seek players to join the effort.

Getting the information to the public through sports is “more than a home run,” said a diplomat attending the event. “They hit it out of the ballpark.”