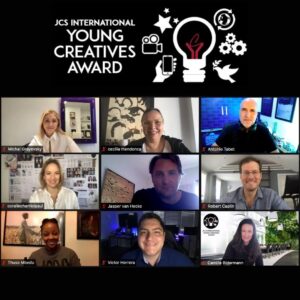 JCS International, a Ronald S. Lauder Company, has announced the recipients of the 2021 JCSI Young Creatives Awards. The topic for this year’s submission was: “Stand Up for Peace – Women & Men United for Change.”

The JCS International Young Creatives Award was established to support and develop young talent across the globe. Founded by businessman philanthropist and leader Ronald S. Lauder, its purpose is to focus on continuing a conversation around peace. Lauder is a former US ambassador to Austria who has dedicated his life to fighting for peace. Of course, this includes peace among people, religions, and countries in the Middle East. In fact, Lauder was the recipient of the Directorate Award at the 34th International Emmys in 2006.

Additionally, JCSI, a NYC-based organization, engages in a wide range of activities and services. For example, these include advocacy, policy research, strategic communications, and content creation.

“As the world continues to grapple with the turmoil of the worldwide Covid-19 pandemic, we view this year’s JCS International Young Creatives Awards theme as especially compelling, relevant, and close to our hearts,” says Lauder. Consequently, he added, “It is JCSI’s honor to host the extraordinary short films and award the talented recipients for their contribution to the exceptional acts of unity that create meaningful change for people in their everyday lives. Hence, “This year’s winners represent three excellent examples of this worthy theme.”

Therefore, the 2021 recipients are:

Have you ever wondered how big cities, projects, associations, and even ant hills were made? It did not require just one individual, but a group that could contribute something meaningful to them. So, let’s make the change together!

Of course, change begins at home. The next generations are watching. So, show them Peace.

A stop motion short that responds to the racism against the Asian community.

Harassment is not a compliment. Therefore, women and men need to work together and learn how to make a difference, how to make a change.